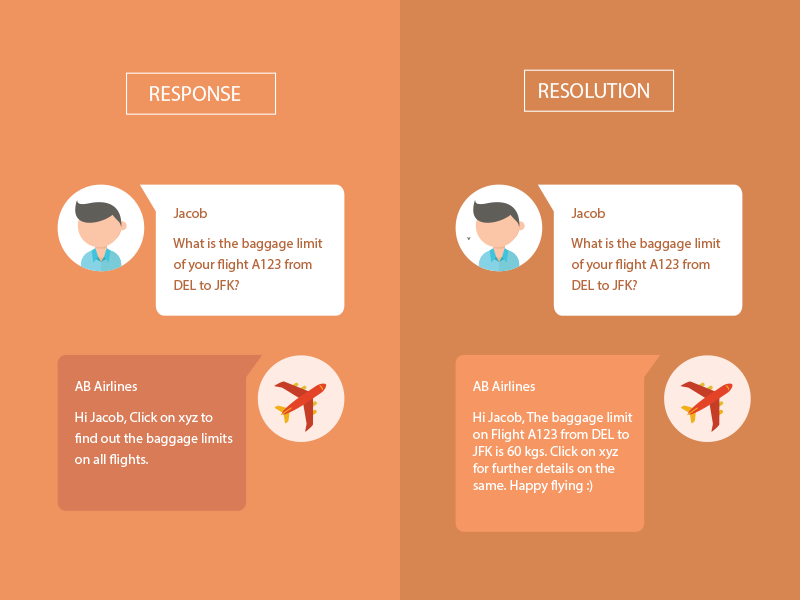 Customer Service on social media has evolved over a period of time. A brand’s image is impacted by the way they manage their customer’s concern online. As the best way to help an unhappy customer is to solve their problem, it becomes critical for brands to give resolutions on social media as opposed to simply responding to them. To explain our point better, let’s look at two popular airline brands to understand how both the approaches work.

Recently, an American Airlines’ customer complained about her 3-year old being allotted a seat in a different row on an 8-hour flight. What the customer needed was for her toddler to be seated next to her. American Airlines redirected the customer to their helpline number instead of giving her a solution on Twitter itself. The customer ended up complaining about how the helpline ironically didn’t help as she was kept on hold for almost an hour with no acceptable solution. The customer summed up her interaction with the brand as “shocking”, a reaction which isn’t good for any brand.

@AmericanAir seriously a 3 year sitting in another row? Flight looks fully booked. This is not on.

I don't think I mentioned it was an intern'l flight. We are all seated separately on a 8 hr flight. Booked together in AUG

Our apologies, Renee. Here's the information for our international numbers: https://t.co/Y3rvFiW5bQ

In this case, while the brand replied to the customer within an hour and a half, they didn’t give her a resolution. Therefore, an act of simply responding wasn’t sufficient to solve the customer’s concern.

A sharp contrast was seen in how Royal Dutch Airlines responded to customer queries.

We are more than happy to host you on your flight! However, the rules differ per destination. Our advice is to always check >>

<< https://t.co/9XQt97mmFi. Let us know if you have further queries and we would remain at your complete disposal.

Hello again! 🙂 Is there any way that you can get a certification, in writing, from the embassy just to be on the safe side?

A print out from the official local page of the embassy would be handy 🙂 If you need us again, we'll be right here.

Recently, a customer queried whether he could fly with the Royal Dutch Airlines to the United States with a US refugee travel document. Previously, another airline hadn’t acknowledged that document and thus the customer didn’t want that scenario to repeat itself. The brand redirected the customer to their online portal which helps understand the requisite travel documents. As the customer quoted the Dutch Embassy about how he could travel for 90 days without needing a visa, the brand recommended that he carry a print out of that declaration too. This effectively clarified the customer’s concerns and satisfied his curiosity. The customer complimented the brand’s customer service and vowed to fly with Royal Dutch Airlines on his way back to the Netherlands. The entire interaction took an hour or so, but was successful in assuring the customer instead of redirecting him to another channel or helpline.

Response reflects your online presence, but resolution shows your concern. If a brand is unable to provide resolution to a customer’s concern posted online, its web presence is only good for a show, but not for business.

The standard response approach assures the customer getting a response from a brand. However, it tends to redirect the customer to a contact center, branch or make them write an email to explain their concern all over again. The resolution-centric approach is calculated, informed and empathetic. It focuses on understanding a customer’s concern and giving them a resolution upfront, or else constantly following up until they get a solution.

We advocate that a resolution-centric approach helps create happy customers and increase brand goodwill. So, what is stopping you from taking a step ahead? It’s time to shift your approach from “Response” to “Resolution”.