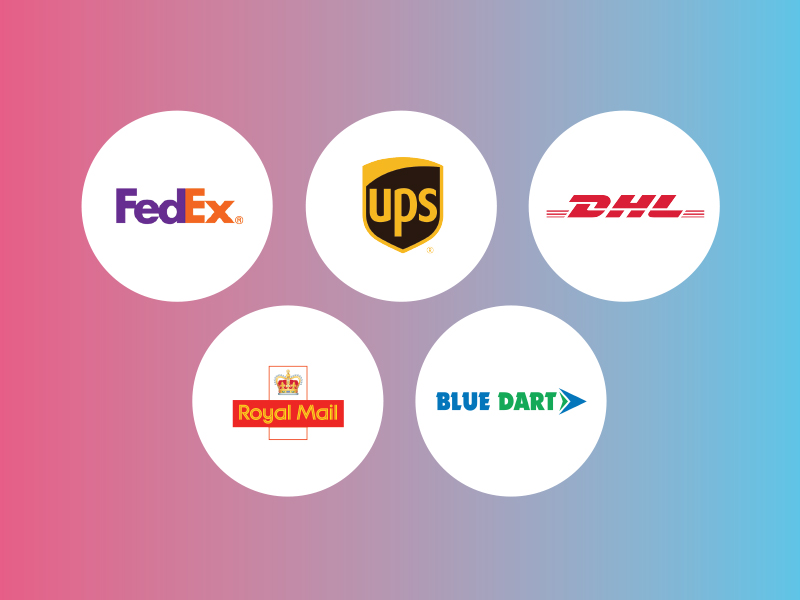 Fedex, DHL, UPS, Royal Mail and Blue Dart are the top 5 courier delivery businesses of the world. As their services are used by brands and people alike, customer service is anything but critical for them. To understand which courier brand provided superior customer service, an analysis was done for each brand. Using their Facebook and Twitter profiles, these brands were studied on parameters such as:

Based on the above factors, each brand was assigned a Social Media Customer Service score. Based on a scale of 1 to 100 with the latter being the highest, each brand received a score for its Facebook and Twitter profile. 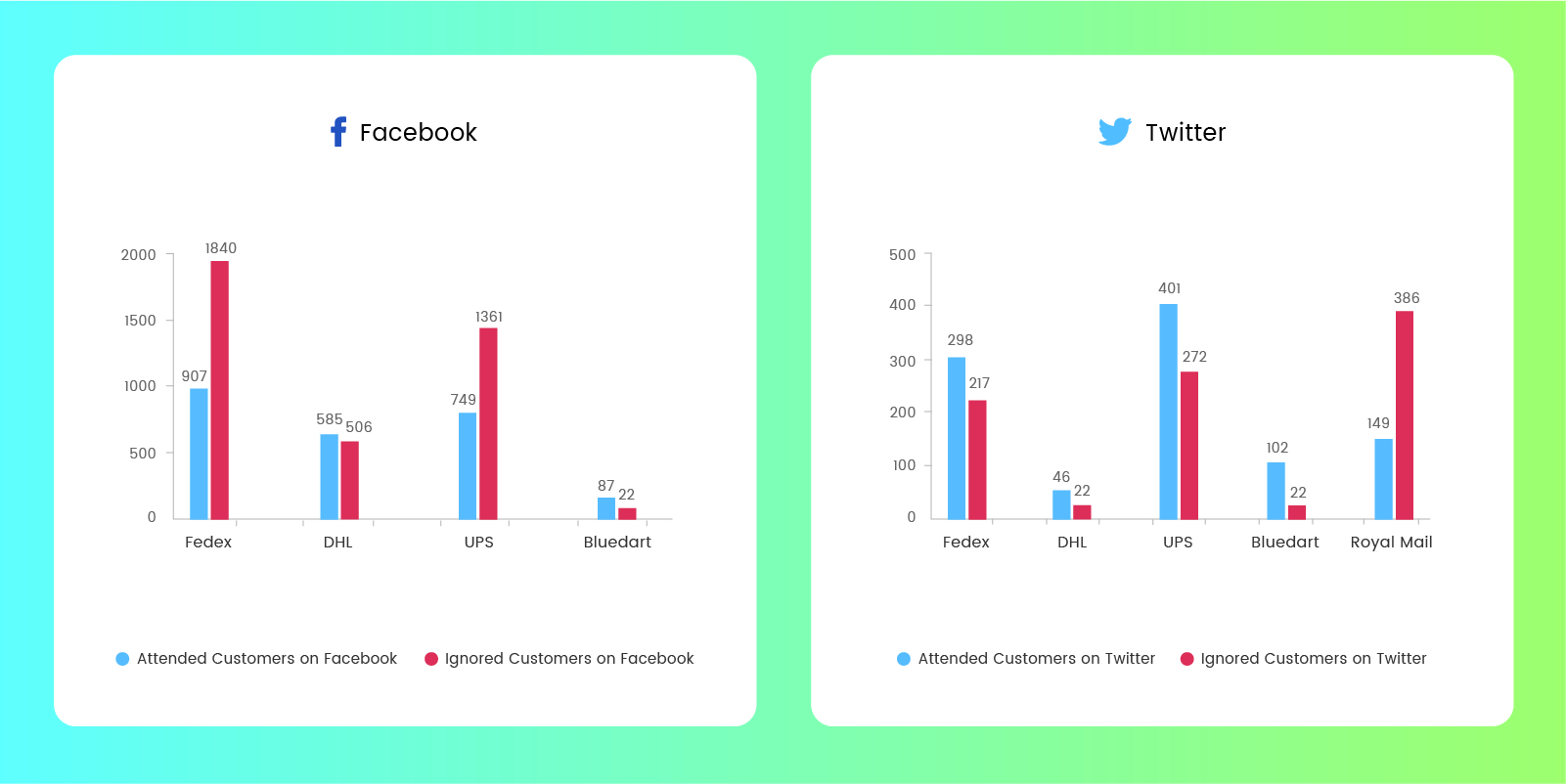 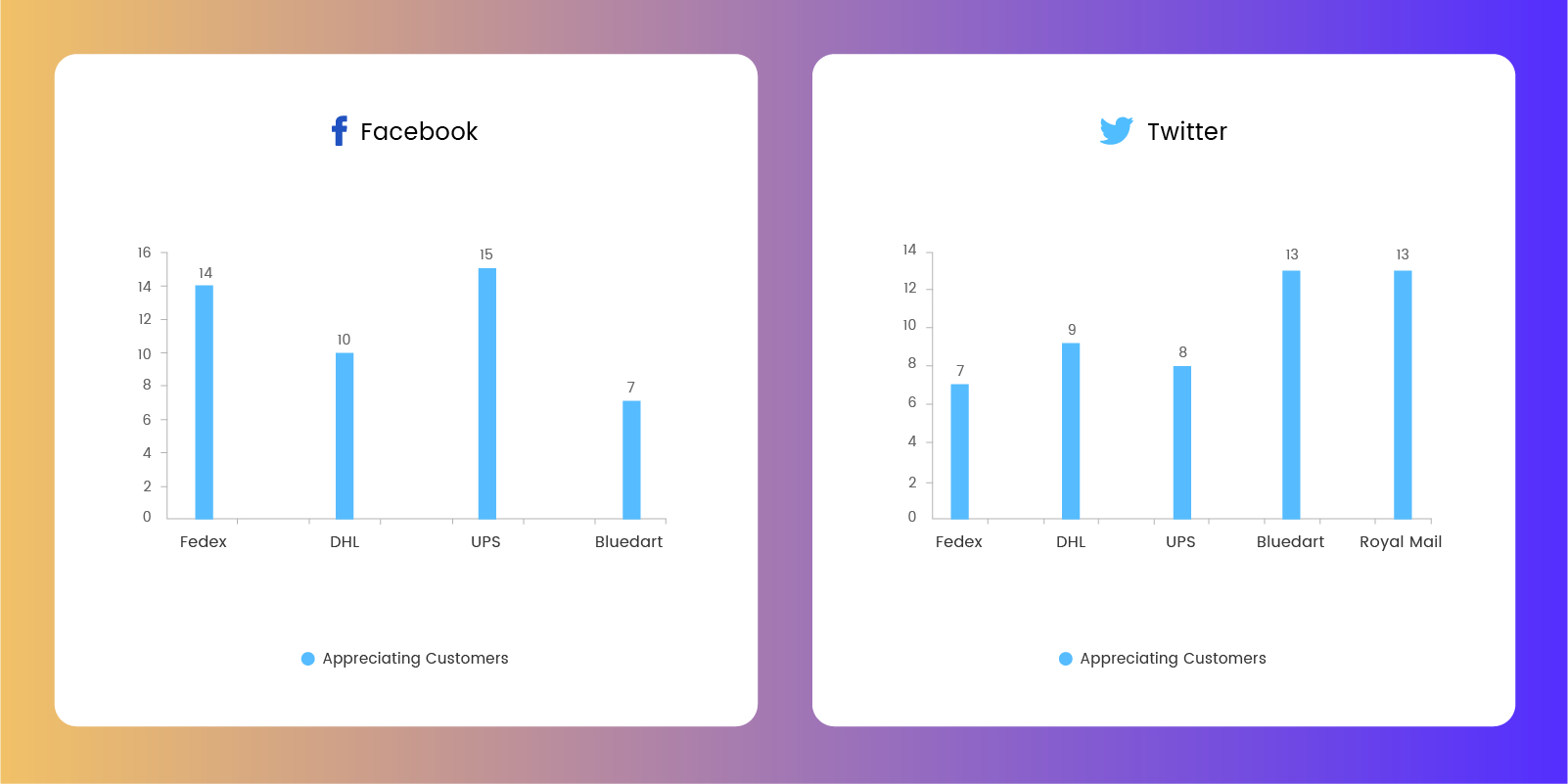 Ask any customer service agent about how they feel when they get an appreciation from a customer. It’s a magnificent feeling, which brands thrive on and look forward to. Having a healthy volume of appreciating customers creates a positive image for the brand and inspires confidence for the brands in the hearts of other customers.

UPS and Fedex were the brands with the highest volume of Appreciative customers on Facebook. Here is one of the posts on UPS Facebook page from an appreciating customer:

Thanks so much!how is it I find out more with one tweet than in one week of tracking.thanks again appreciative customer

Thanks for your prompt service! I got my product delivered today! Well done! 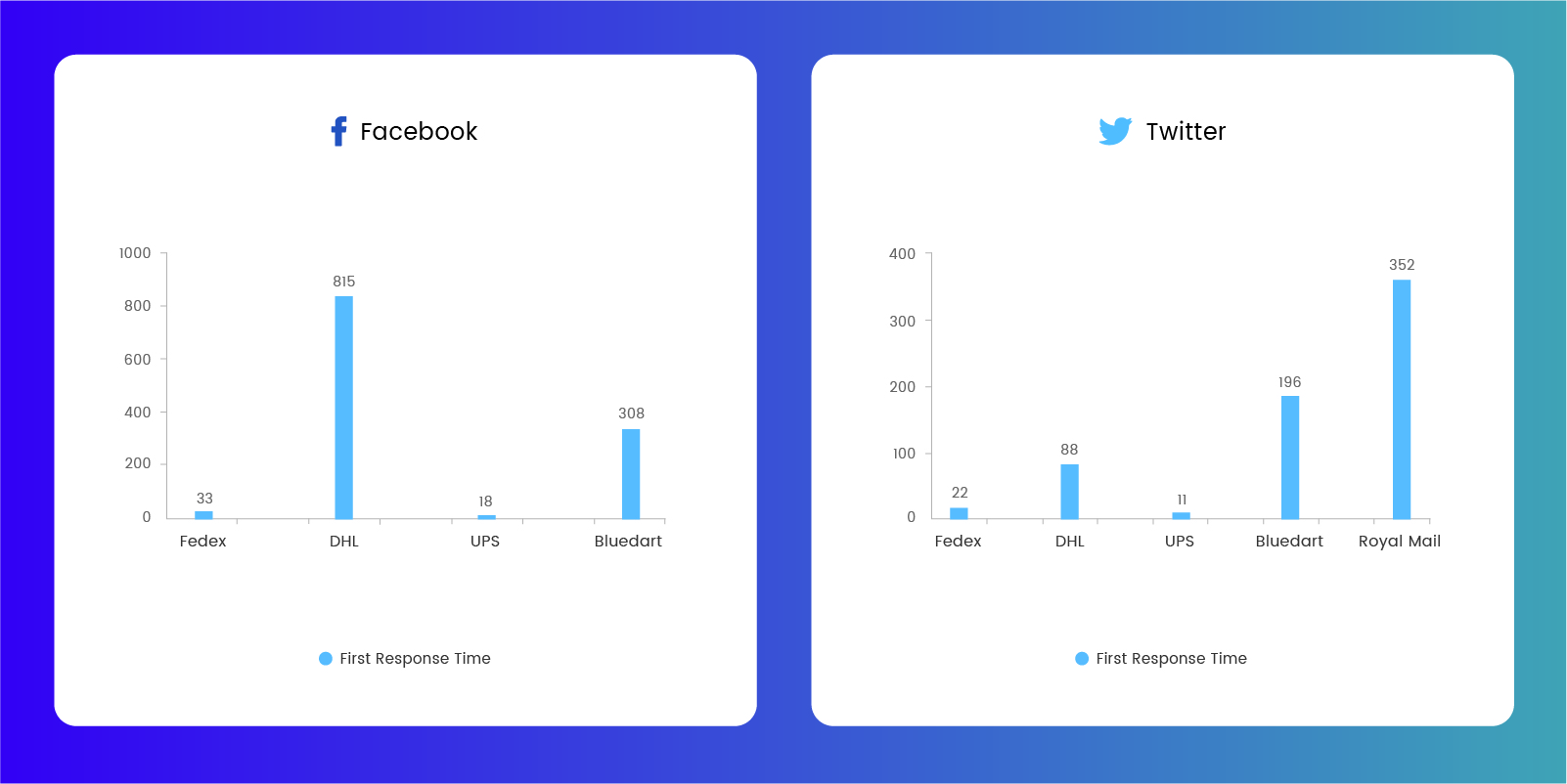 Few instances of UPS showing quick First Response Time have been shown below: 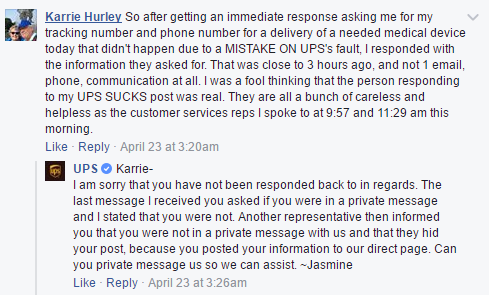 Hey @UPSHelp notice says package was left behind house by basement door. Not there. We live on 2nd floor! Wtf?!? 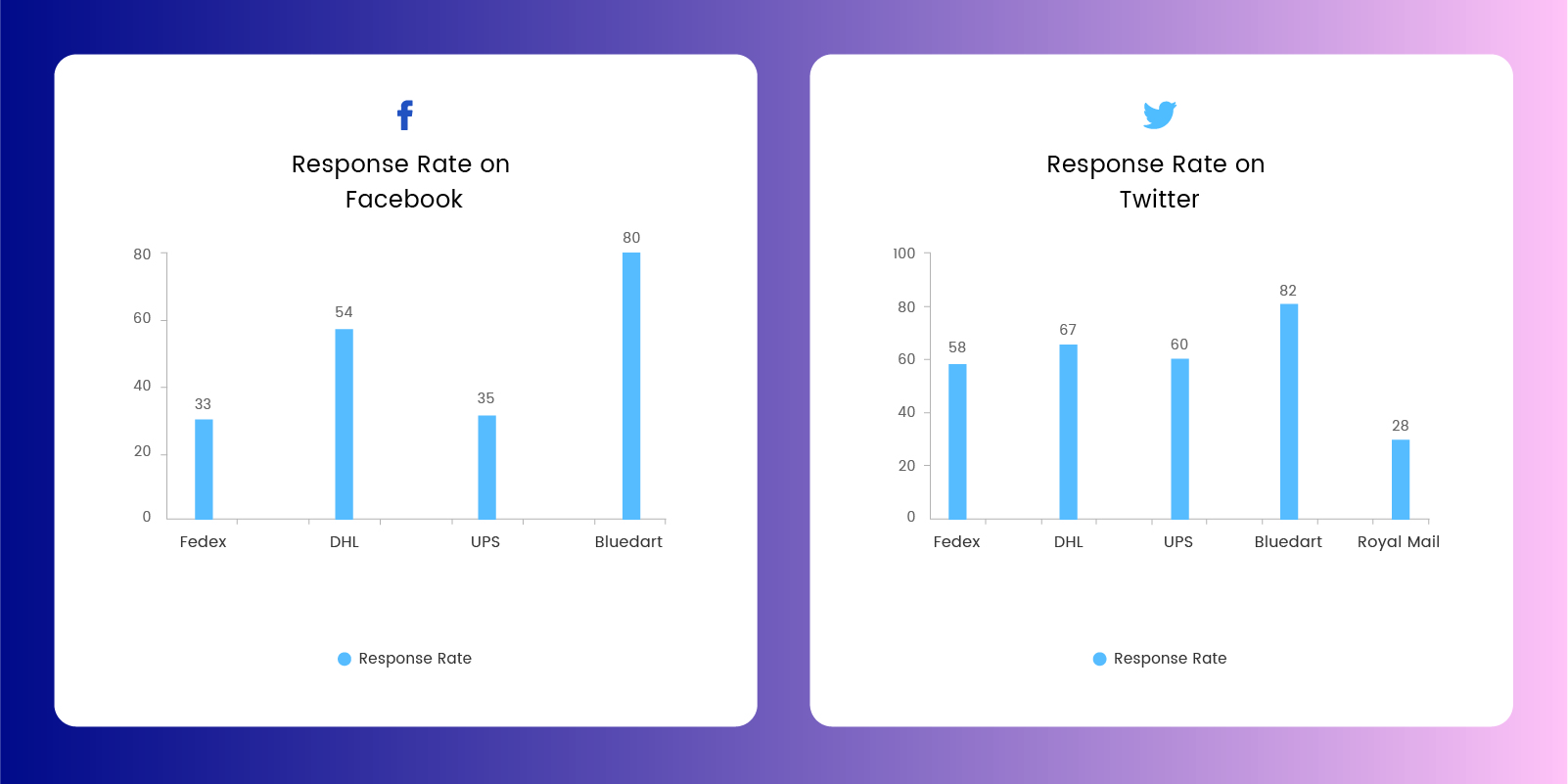 Response Rate represents the number of customer queries you have responded to, out of the total number of customer queries present on your social media channels. Higher response rates are indicative of the brand attending to queries and concerns of most customers, if not all. Hence, higher response rates are ideal for all brands.The graphs shared above help identify that Blue Dart’s Average Response Rate across Facebook and Twitter trumps all other brands. While Fedex possessed the lowest figures on Facebook, Royal Mail was its counterpart on Twitter.

The graphs shared above help identify that Blue Dart’s Average Response Rate across Facebook and Twitter trumps all other brands. While Fedex possessed the lowest figures on Facebook, Royal Mail was its counterpart on Twitter.

Social Media Customer Service Score is defined as the overall customer service performance of the company on social media, which takes metrics like response rate, first response time, appreciative customers and attended vs ignored customers along with some others.

This score sets a benchmark for businesses to know how they fare at their social media response management. 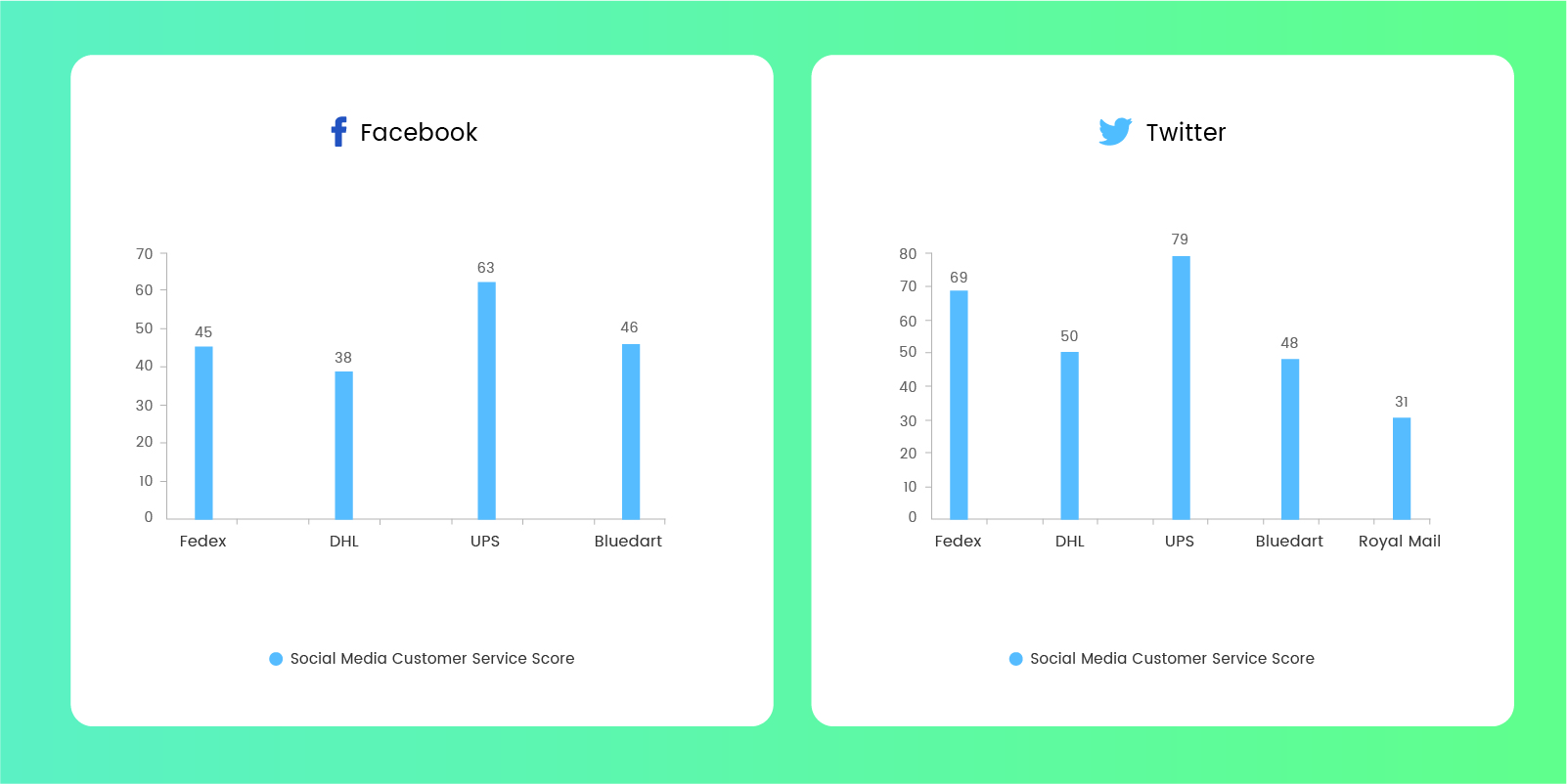 UPS achieved the highest score on Facebook and Twitter. The other top brands were Blue Dart and Fedex and Blue Dart were at second and third positions respectively. On Twitter, UPS, Fedex and DHL were at the top 3 positions.

An improvement on the Social Media Customer Service scores can be achieved by paying attention to response quality, turnaround times and attending a higher volume of customers on brand channels.

Disclaimer: Analysis was performed using Trooya’s Benchmarking Tool. Each shortlisted brand’s Twitter and Facebook channels were considered, except those who only had presence on one of those mediums. Time period for the reports and scores are dated from 2nd April 2017- 2nd May 2017